The recent Employee Engagement Summit, hosted by Microsoft had a galvanizing moment for me, an old school social collaborator with links back to the early days of Yammer, Jive, and Newsgator. That moment came in the opening frames as host Andrew Anton, of Microsoft, laid out the key themes:

It all sounded so familiar…so right. As I listened, the themes of working out loud, transparency and trust began to coalesce. Yes, I had heard it before and that isn’t a bad thing. The messages I was hearing today reminded me of Responsive.org, a group of forward thinkers who created a manifesto that said, in essence, there has to be a better way of working, and here it is.

What was so galvanizing for me was that so many organizations are figuring it out and some of the companies represented this day, were using an old reliable friend (Yammer) and the new kid (Microsoft Teams). And they are nailing it. I will discuss three examples in this article.

I have to tie up a loose end first. There are strong Yammer (and Microsoft) genes in the founders of Responsive.org: Adam Pisoni and Matthew Partovi to name two. The cool thing, the thing that makes me smile, is that they were right and now we are seeing it mainstream. Forgive me for glazing over a decade or more of enterprise social network (ESN) history (I am leaving out a long list of amazing and relevant thinkers) but these are exciting times to be a believer in ESN and organizational change at scale. Not saying perfect, but exciting to see the progress we are making in this space.

KFC’s Colonel was real and you should be too

People aren’t going to trust a brand just because you say they should. According to Jonathan D’Souza, People Capability Director at KFC South Pacific, people want real stories from real people. They took an “inside out” approach to getting brand trust. When employees are authentic about themselves and what the brand promises, then you’ve got something.

As KFC in Australia worked to discover what it meant to be engaged, they found employees wanted these two things above all else:

D’Souza and team saw that Yammer could help them do that. They also saw the need for team members to engage with each other and to not count on the head office to always drive it. D’Souza’s message: trust your people. A data point, they have had to take down only .03% of posts from their Yammer network.

He gave two examples of engagement within their network. Feeling connected comes from being recognized, like when you’re recognized on Yammer by the CEO, Nikki Lawson (by the way, she is a top ten contributor on their network). Having a voice means being able to ask the Chief People Officer, Rob Phipps, questions via their #ASKROB campaign – and get answers back.

All good stuff, but the compelling part of  his talk came when he tied engagement to business outcomes. He gave the following example. Safety is a topic that is very important to all organizations and a serious one. To get team members to engage in safety awareness, KFC Australia took a somewhat comedic approach with good results. They created a corporately funny video of safety do’s and don’ts. Result: after the video was released organization wide, they saw a 28% increase in safety incident reporting.

Having just passed its one year birthday, Teams is making significant headway in organizations of all sizes. Accenture, the mega-firm of consultants, is using Teams in a variety of ways. Jason Warnke described its use as a “digital cockpit.” I see where he’s coming from but not my favorite Teams descriptor. Makes it feel like we’re all flying our own plane. Teams is about what we can do together.

Farren Roper then took the audience through one of their Teams use cases, recruiting on campus. He briefly showed:

More about their Teams journey can be found here.

Turns out, the folks that make Oreos are big Yammer users

Russell Dyer, the VP of Global Communications at Mondelez International, the makers of Oreos, Cadbury and many other foods I can’t seem to avoid, had the line of the day about Yammer. He was describing, that part of their competitive advantage was their diverse, geographic footprint. Good, but presents challenges. With a base this diverse and wide, there is an increase of virtual relationships of all types that develop, virtual reporting lines, teams, etc. Yammer helps with this challenge: “Yammer shrinks our world and enables those human conversations on a level that no other tool provides.” 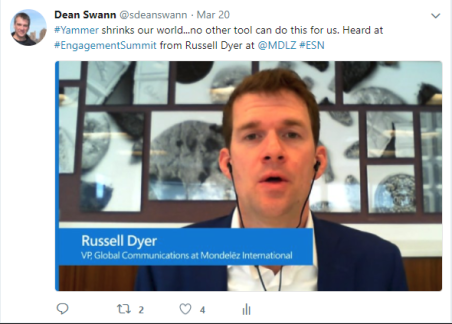 He went on to say that, “There is nothing more powerful than arming a colleague with a tool with which, they can tell their own story.”

Dyer gave a Yammer use case that will resonate with anyone in retail. Their sales folks are rarely in offices and often find themselves in stores or with suppliers. They found Yammer really helpful in sharing photos of displays. This sharing has led to new conversations and has started dialogues that didn’t happen previously.

There was much more in the one hour event than I have here, so I urge you to go watch the whole thing, especially the interview with Chief People Officer Kathleen Hogan of Microsoft. She described the cultural changes that have been occurring at Microsoft. In short, her messages were: focus on a growth mindset, be customer obsessed, and be diverse and inclusive. If you want to know more, here is a link to an article Hogan wrote  on cultural change.