Lots to like coming out of the announcements on Office 365 Reporting last week in beautiful, warm Orlando. There is a little something for everyone with the importance of signals being recognized. What I heard: customers and partners want better data and critically, more accessible data. Here are a few key announcements from the show. 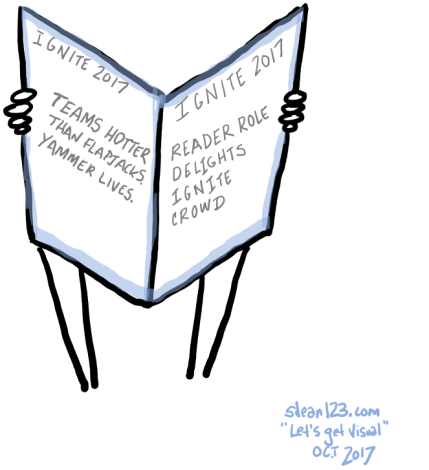 Rolled out: The Reader Role

Conventional wisdom dictates that you should limit the total number of admins in your organization. Hard to argue that. There are four types of admins for Office 365: Global Admin, Exchange Admin, Skype for Business Admin and SharePoint Admin. You’ll note that list doesn’t include your Yammer Verified Admin. While not the only one, this was one of the factors that played into the feature request for Reader role access to reports. Admins and community managers who care about what is going on, need reporting. Enter the Reader role.

The capability for Office 365 admins to grant regular ol’ users the ability to consume all the reports in the Admin Center was announced by Anne Michels (@Anne_Michels) and others from her team at the show. There was much rejoicing. Available now, all you have to do is convince your admin to give it to you. If you do, you’ll also be able to instantiate the Adoption Content Pack (ACP) just like an admin. One thing to look out for though: in our testing, if you are granted Reader role and you instantiate a Content Pack and then your role is revoked, you still have access to the ACP in Power BI. Just a data point on early testing. If that changes, I’ll report back.

The ACP will be generally available early in the new year. The exact date was not announced. In fact, a look at the slide I saw indicated a Q1-ish, Q2 feel. But, when it does, it will have a new name: Office 365 Usage Analytics. I quibble a little bit over the analytics part as I am believer in drawing a distinction between reporting and analytics as described in this informative blog  by John White (@diverdown1964).

If you want to talk about a Microsoft product that is hotter than flapjacks in a mining camp, pick Microsoft Teams. Two reports were announced that should show up in the Office 365 Admin Center by mid-October: Teams Activity report showing what’s popular and an Apps Usage report. This is good news but please, some signals via APIs would be nice. And some flapjacks.

This immediately got the Captain Obvious award but when Anne mentioned it, I made myself a note. If you want to know what is coming, keep an eye on the Message Center. That is the straight goods.

The Yammer team announced group level statistics are now in the UI at the group level and will begin rolling out soon. These stats are based on Likes, Reads, and Posts and are available in three set date ranges: 7 days, 28 days, and 1 year. The key here is that the Yammer product team is listening to its user base. The level of these allow for some insights but leave room for third parties like my team at tyGraph to go deeper, if and when community managers, business stakeholders and IT professionals need it.

UPDATE: The roll out is set to begin on November 2nd. Here is the wording of the announcement as it appears in the Message Center:

“On November 2, 2017, we’ll be rolling out the group insights feature in Yammer. Group insights will provide group admins and members with a comprehensive view of group activity and engagement. This message is associated with Office 365 Roadmap ID 20504.

How does this affect me?

Some of the feature highlights are:

2. Visualization of activities by group members and non-members across 7-day, 28-day, and 12-month periods.

3. Composition of how many group members and non-members posted, read or liked messages in the group.

4. Trends for number of posted, read and liked messages.

While not a comprehensive list of all the reporting announcements, the above indicates that understanding usage and adoption is an important business goal and should be part of an overall collaboration strategy.

What thoughts do you have on what was announced for Office 365 reporting? I’d love to hear them!

(Blog notes: I sketchnote exclusively on a Surface Pro 4. The “holding newspaper” doodle is derived from a similar work by Jessica Esch (@jesch30).